Thousands attend our 'Save Our Schools' regional rallies

Above, at our #SaveOurSchools West area rally on Nov. 16, 2017, UTLA member and teacher Antonio Flores, from 6th Avenue Elementary School, talks to Antonio Valverde from Univision channel 34, about how large classroom sizes are not good for teachers or students, and reiterated that over-testing benefits no one. "We need to stop excessive testing because it has a negative effect on the student. All we are doing is testing and we are not able to teach,” he said.

Above, UTLA members and others hold signs as they march along Nordhoff St. outside of Monroe High School in North Hills, Thursday, Nov. 16, 2017. The event was held in support of UTLA contract bargaining. (Photo by Hans Gutknecht, Los Angeles Daily News/SCNG)

Thousands, who attended our raucous rallies on November 16, stretched from Harbor City to North Hills displayed the positive spirit of public education while sending a serious message about what’s at stake if we don’t stop starving our schools and start supporting educators.

Parents, students, educators, and community groups massed under the “Save Our Schools” banner at six locations across the district, and each event had its own flavor and energy.

Out at the rallies, UTLA members spoke to the many issues that drove them to the streets. “I’m here in support of our healthcare and improved expenditures on kids,” Frost Middle School teacher Mary Wrobleski said.  “If we spend money the right way, we can really help our students. I’d like to see smaller class sizes, but even more important, I’d like to see a bigger investment in curriculum and training.”

“We are gathered here today for one reason: to fight for what we deserve from the district,” Monroe High student Cindy Ruiz said at the Valley rally. “Teachers, who want to see successful futures for the students they teach, are paid little for the jobs they do. Taking away healthcare, taking away pay raises, and laying off teachers is no way to thank them for everything they do.”

UTLA President Alex Caputo-Pearl on our '20 by 20' campaign

“20 x 20 is not a pie-in-the-sky idea — other states already do it,” UTLA President Alex Caputo-Pearl said.  “In California, the sixth-largest economy in the world and the birthplace of Hollywood, Google, Apple, and Silicon Valley, this is doable and how we will achieve our righteous demands that are crucial to building a thriving, sustainable public school system.”

California Ranks 46th!
California is the 6th largest economy in the world, yet it ranks 46th in the nation on per pupil spending. California spends 7 times ($75,560) more each year per prisoner than it spends per student ($10,291). We hold LAUSD accountable to adjust their priorities.

Regional Areas at a Glance 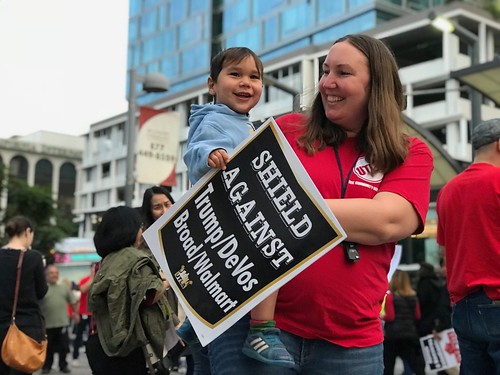 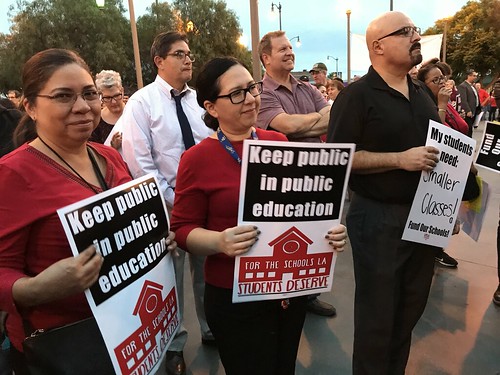 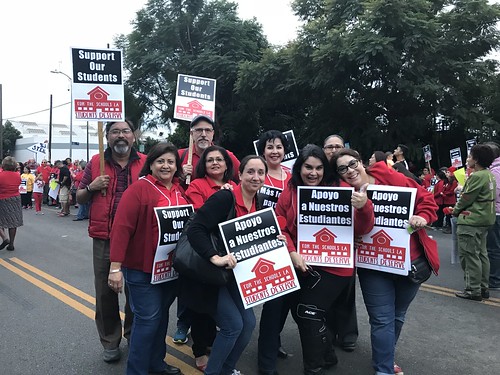 At Diego Rivera Learning Center, where South and Central Areas rallied, the kids rock band from Miramonte Elementary pumped up the crowd, and the group marched to the sound of honking cars. 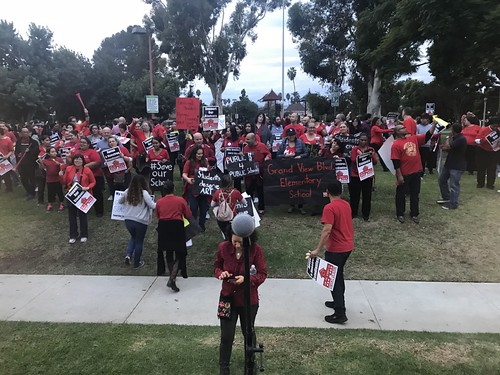 At Los Angeles High School in the West Area, members formed a human billboard along Olympic Boulevard, with the spirited tone set by the LA High marching band. 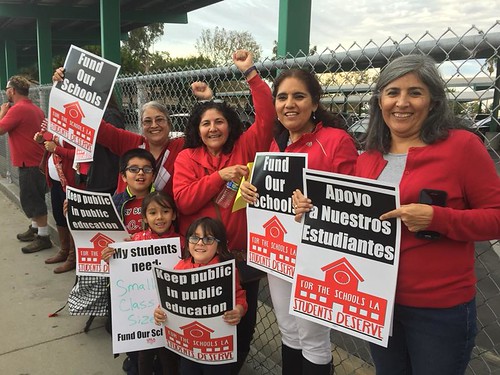 At Narbonne High, the Harbor Area community stretched into a long picket line and ended the rally singing along to “Lean on Me” and swaying together side to side. 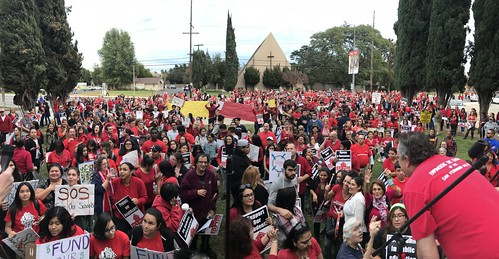 A big turnout of Valley East and Valley West teachers shut down Haskell Avenue outside Monroe High School, where the marching band set the stage for a speaker program with parents, community groups, teachers, and students.

UTLA has reached a tentative agreement in reopener bargaining with the Los Angeles Unified School District on extended safety measures, a 5% pay raise for educators, strategies for staffing the City of Angels online independent study program, and learning continuity for students who must quarantine.

Parents, educators, students, and community members from Monroe High in the San Fernando Valley united today to denounce so-called Student-Centered Funding and to call on LAUSD School Board President Kelly Gonez to stand with them and vote no on SCF on September 14.

UTLA is in full support of the decision by the School Board and Interim Superintendent Megan Reilly to require full COVID-19 vaccination for all eligible students. UTLA made this demand at the bargaining table, publicly called for this action, and take pride in continuing to lead on issues of safety in our schools.