Strike Watch
Share this Article Share on Facebook Tweet on Twitter Email
× BARGAINING UPDATE: Jan. 19, 2019 — Bargaining continued Friday night and resumed today. We expect to bargain over the weekend, if necessary. No more details can be given since the parties have agreed to confidentiality.

TWITTER MOMENT: Alex gets a standing ovation from the audience on Real Time with Bill Maher. Maher's sister is a teacher.

More than 60,000 let the sunshine in at UTLA rally

TWITTER MOMENT: Alex gets a standing ovation from the audience on Real Time with Bill Maher on Friday night. Maher's sister is a teacher.

UTLA members closed out the first week of our historic strike with a raucous and joyful rally with parents and students in front of City Hall, just steps away from where UTLA was bargaining with LAUSD. After four rainy days on the picket lines, the rally crowd basked in the sunshine and in the power of the collective movement we have built. Read more from the rally & Alex's speech>>

“UTLA, do you feel your power?” UTLA President Alex Caputo-Pearl asked the crowd, estimated at more than 60,000. “You have taken over the city of Los Angeles, in the streets and on the picket lines. The last five days have achieved many things, and the biggest is that it has stunned the billionaire privatizers.”

Performers, including Tom Morello, Aloe Blanc, Maya Jupiter, and Marisa Ronstadt, took to the stage and set a soundtrack for our movement, giving shout-outs to public education and to the teachers who are putting everything on the line to fight for it.

Blanc called on his peers in Hollywood and the music industry to stand up and support public education.

“There’s no more time to wait,” Blanc said. “There’s no reason why we can’t have the education system we need and deserve.”

Morello told the crowd that someone asked him today why he was playing for teachers.

Morello then called Perry Farrell and Etty Lau Farrell on stage and noted that the couple have been cooking meals and delivering them to the picket lines at their neighborhood school—just one example of thousands across the city of the community showing support and keeping our members energized.

“All we have achieved so far is because our picket lines are strong,” Caputo-Pearl said. “We will work relentlessly in negotiations but we have to come back next week with picket lines even stronger. We need to last just one day longer than the billionaires and then we’ll win.”

You’ve taken over this city. With cars honking out in support everywhere, people we don’t know buying us meals, parents bringing food to the picket line, students making songs about their teachers, media listening to our stories and the whole world watching, we are the heroes of Los Angeles.

We have never been at a more crucial moment for public education. And now we have the attention of the nation to tell our story. Our schools are being starved intentionally because there is a privatization agenda – to privatize schools, create inequity for students, bust unions, and attack healthcare and pensions.

If we don’t stop it now, our students will lose, and we will lose.

We are not going to let that happen.

Those California Democrats should be ashamed that they have been ascendant as California’s school population has become more students of color -- and that that change has correlated directly with a precipitous dropping of California’s per pupil spending ranking. This is institutional racism. And, some of those same California Democrats are trying to stop us from striking – attempting to infringe on the right to strike of any union is shameful, but attempting that with a union that is 70% women is especially reprehensible.

Look at what having strong picket lines has helped us achieve this week.

When I say “we achieved this,” you all respond “because our picket lines are strong.”

Over 30,000 people out, one of the biggest strikes in California history. We achieved this – because our picket lines are strong.

Tens of thousands of parents in support and over 80% polled are in support of the strike. We achieved this -- because our picket lines are strong.

Media everywhere about how our strike is pushing the conversation on how to support schools nationally, in Washington DC, and in every state. We achieved this -- because our picket lines are strong.

Richard Dreyfus, Kamala Harris, Bernie Sanders, the National Football League Players Association, and many more celebrity supporters. We achieved this -- because our picket lines are strong.

Mayor Eric Garcetti’s office involved as a mediator in our negotiations. We achieved this – because our picket lines are strong.

State Superintendent Tony Thurmond involved as a support for negotiations. We achieved this -- because our picket lines are strong.

Let me hear you answer me with – Lines stronger next week.

For a fair wage for educators – Lines stronger next week.

To get the district to use the $2 billion reserve – Lines stronger next week.

For regulation on charter co-locations – Lines stronger next week.

For educators to be given voice in school decisions – Lines stronger next week.

For Community Schools that work for kids and are an alternative to charters – Lines stronger next week.

To take on the charter industry – Lines stronger next week. 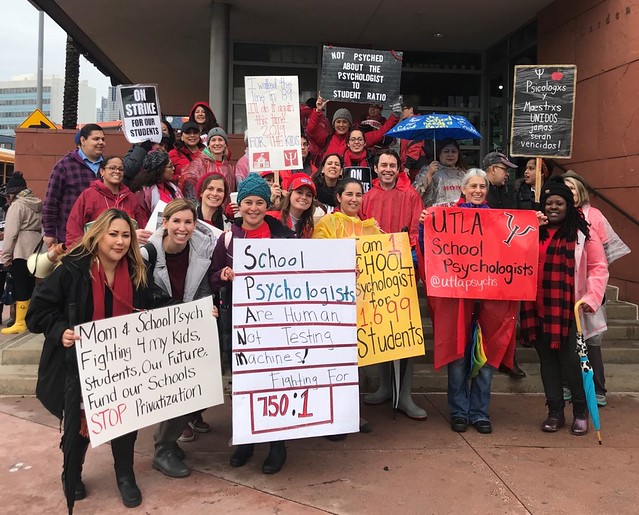 Email photos of your school site to webmaster@utla.net. We will post them daily.

UTLA members have overwhelmingly approved the sideletter agreement with LAUSD on a physical return for the 2021-2022 school year. Over three days of voting from June 15 through 17 conducted by Integrity Voting Systems, 12,193 ballots were cast, with 94% Yes ballots (11,485 ballots) and 6% No (708).

LA Unified plans to return to full, in-person learning five days a week for the 2021-2022 school year, unless pandemic conditions change for the worse.